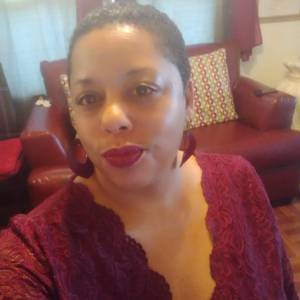 A survivor two times over, Yvonne first escaped a manipulative marriage only to find herself in a physically abusive relationship that she was convinced would end her life.

“Like grief, the pain I still feel from these relationships doesn’t have a day or time. It comes and goes,” Yvonne said. “I don’t mind sharing my story now because I’m out of the situation, but you do wonder what people think of you and what they’ll say behind your back, like why you didn’t just leave or how you must have liked it because you stayed.”

Throughout their 18-year marriage, Yvonne’s husband was emotionally and mentally abusive, using manipulation to control nearly every aspect of her life.

“We had two cars but I wasn’t allowed to have one. He wanted me to have friends but they could only be his family members,” said Yvonne, a North Carolina native who relocated to Louisville with her then-husband in 2012.

“I spent 16 of our 18 years asking myself, ‘What am I doing here?’ and two years waiting for him to sign divorce papers.”

When Yvonne decided to end her marriage, she sought help from Seven Counties Services where she and her daughters became certified in children and family divorce counseling. She enrolled her younger daughter in counseling for three years to work through abuse she experienced from her dad – including when he publicly spit in her face at school.

During their two years of separation, the couple lived apart, but he would show up at her apartment needing a place to stay, follow her while she was shopping, call incessantly, and make inappropriate comments in front of her daughters, the younger of whom they shared. Eventually, Yvonne took out an emergency protective order (EPO) after her husband called 259 times in one day and threatened to kill himself and her daughters. In court, his attorney used the fact that she had kept her maiden name to question whether she was someone who could be trusted.

A new chapter of abuse

When her divorce was finalized, Yvonne was single for five years, though she occasionally dated a man she’d befriended through her ex-husband’s family. Yvonne bought a home in 2018, and he moved in after sharing that he’d like to have a committed relationship.

Though she’d known him for years, Yvonne was shocked when she learned how much he drank and how easily he lost his temper. He would often yell, pull her hair, twist her ears, bite her, choke her as she slept, squeeze her arms to the point of bruising, and punch her in the legs and back where no one could see the injuries.

“He would just snap. One minute he’d be watching TV, and then he’d just fly into a rage,” said Yvonne. “He didn’t really sleep and didn’t want me to either. I didn’t get more than a couple hours of sleep most nights we were together.”

The abuse came to a head in January 2020, when her daughters left town for a long weekend. Yvonne’s boyfriend knocked her unconscious and put her in a closet in the spare bedroom. He repeatedly picked her up by the throat and slammed her down, jumped on top of her, and tore off her clothing.

“I look back and ask myself, ‘What did I do or say to make this happen?’” Yvonne said. “But I know it was nothing I did. This is someone who’s sick.”

As he beat her, Yvonne managed to use her legs to scoot into the hallway. She remembers looking up at the ceiling and thinking, “I am not going to make it out of this.” Yvonne said the Lord’s Prayer, thinking it was her last, when he suddenly let her go and she managed to hit her silent alarm. The police came so quickly she hadn’t been able to dress herself before they arrived.

“He told me to go out there and tell the police to go away,” Yvonne said. “But I ran out there and told them I wasn’t OK, my boyfriend was beating me, and to make him get his stuff and leave.”

Her boyfriend was calm and acted like nothing had happened but was arrested after refusing to leave the home. He received two years’ probation, and Yvonne is scheduled to renew her EPO against him in a few short months. She still sees him occasionally walking by her house or at a store or restaurant.

Though Yvonne doesn’t often talk about her relationships, she hopes her experience will open people’s eyes to what may be happening behind closed doors. She emphasized the importance of really knowing who you invite into your home and your life, still in disbelief over the abuse she suffered from a man she’d known for eight years and whose family she’d met.

For those experiencing any type of abuse, Yvonne encourages them to reach out someone they trust and allow them to help. Looking back, she wishes she’d been honest about the emotional and financial abuse she suffered during her marriage when she sought counseling for depression and PTSD.

“I think my parents had an idea of what I was going through but hadn’t heard it from my mouth. Once I was honest with them, it was such a relief to get it off my chest,” said Yvonne. “You are never trapped. There are so many services out there, whether it’s the police or places like The Center for Women and Families who will guide you through the process.”

Looking ahead, Yvonne feels optimistic for herself and her daughters.

“This is the first year I’ll celebrate Thanksgiving in a really long time. After someone breaks you down – physically, emotionally, mentally, financially, spiritually – you don’t feel much like celebrating,” said Yvonne. “I had told my kids I just didn’t want to do it anymore. I didn’t have the spirit or the energy.”

And Yvonne has a simple hope for the future.

“I just want peace,” she said. “Peace of mind, peace when I go to sleep, peace in my thoughts.”