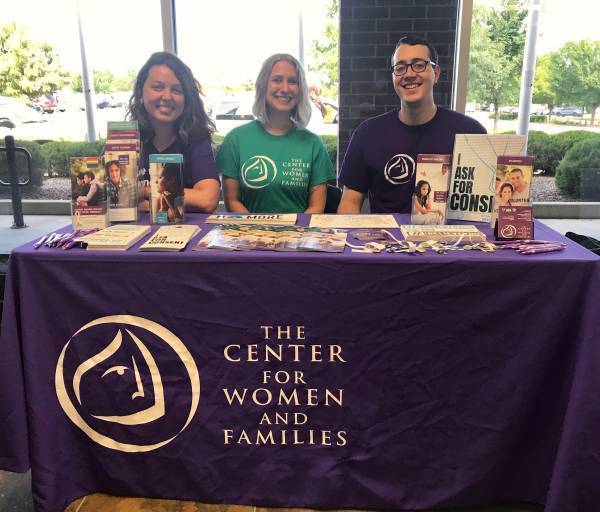 Haley Garrison, Community Outreach Coordinator, and Josh Elkin, Prevention Coordinator, work with middle and high schoolers throughout Southern Indiana to raise awareness and build skills to prevent dating and sexual violence. With students, they discuss identifying red flags of unhealthy and abusive relationships, dealing with rejection in a healthy way, and intervening as a bystander to prevent violence and shift social norms. Haley and Josh reached over 600 individual students in Clark and Floyd counties with these messages during the Fall 2019 semester.

Respecting and understanding consent is key in establishing and maintaining healthy relationships. The Center feels there is a need for more in-depth and nuanced conversations around consent. Many teenagers are engaged in discussions around consent during their orientation week at college, but that’s often far too late. We begin receiving subtle messages around consent and developing our own sense of boundaries from an early age. Relying on colleges and universities to teach incoming students the importance of consent not only excludes those who don’t go to college, but also ignores the reality that one in three adolescents in the U.S. is a victim of physical, sexual, emotional or verbal abuse from a dating partner (loveisrespect.org).

In December, Haley and Josh facilitated an interactive workshop on consent with students at Floyd Central High School. They focused on expanding the conversation around consent beyond the common mantras of “Yes means yes” and “No means no” by encouraging students to think more deeply about the impact of gender roles and stereotypes, relationship history, and power imbalances on consent. In highlighting the importance of asking for consent in everyday interactions, such as giving and receiving hugs, students shifted the discussion to include more than just sexual behavior. While identifying positive and negative verbal and non-verbal cues, the students also explored how coercion and pressure affect a person’s ability to give consent.

Haley and Josh hope this workshop has empowered students to express their own wants, needs, and personal boundaries in all situations. They aim to prevent future domestic and sexual violence by ensuring students understand consent, their responsibility to ask for it, and that everyone has a right to decide what happens to their own body. The Center plans to expand this workshop and bring more students across Southern Indiana into these conversations.