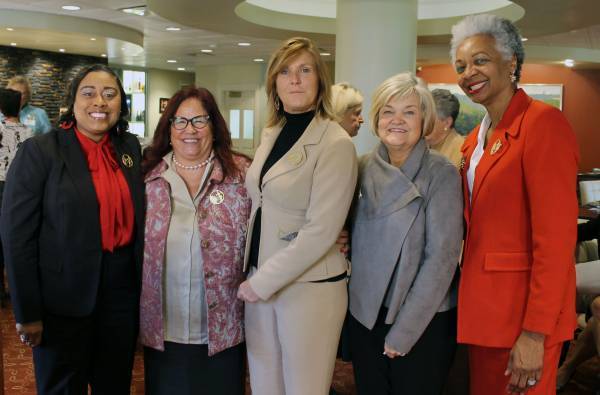 Angie McDonald Evans was promoted to Vice President, Corporate Responsibility and Community Affairs in March 2018, after joining LG&E and KU Energy LLC in January 2015 as Manager, Corporate Responsibility. In her role, Angie is responsible for leading community engagement and investments, key corporate responsibility programs and grant-making processes. For twenty-five years, Angie M. Evans has held leadership positions in both the public and private sectors.  Prior to joining LG&E and KU Energy, Angie was Vice President of Community Leadership at the Community Foundation of Louisville.  Before that post, she served as Director of Planned Giving at the University of Louisville after eight years in the financial industry as a Vice President and Private Banker at National City – now PNC.  Angie’s career began in the public sector, where she worked as Special Assistant to Mayor David L. Armstrong and as the Director of Affirmative Action.

Angie currently serves on the Centre College Board of Trustees and the board of directors for Actors Theatre, American Printing House for the Blind, Bates Community Development Corporation, Community Foundation of Louisville, James Graham Brown Foundation and Women Influencing Louisville.  Former board appointment include Louisville Urban League and the Kentucky Science Center among others.  Angie is a graduate of Leadership Louisville 2003 and Ignite Louisville 2006, and a member of the Business First Forty Under 40 class of 2002.  In 2014, she graduated from Leadership Louisville’s Bingham Fellows program focused on improving West Louisville.

Angie is a graduate of Center College and received her Juris Doctor from the University of Kentucky College of Law.

Maria was the first female banker to break the “glass ceiling” in Louisville as the first woman Executive Vice President at what was then the Liberty National Bank. Maria reinvented her career thereafter leading the delivery of affordable and workforce housing in Louisville. As the President of the Housing Partnership Inc., she oversaw the enrollment of over 7,000 families in credit counseling, the creation of 2,700 new homeowners and installed the first local employer assisted housing program. Maria then accepted a position at the Federal Reserve Bank of St. Louis to lead efforts in Louisville to develop a new type of branch office focused on community development, economic education and regional economic growth.

Throughout the years, Maria served on 28 different community boards, and was recognized with numerous individual awards for leadership. Maria is a past Board Member and Chair of Norton Healthcare, Board Member and Treasurer of the Louisville Community Foundation, Bellarmine University Trustee, Board Member of the Center for Women & Families, and the Board of the Louisville Branch Federal Reserve Bank of St. Louis. Maria was founding board member of Gilda’s Club of Louisville and served on the board of Women 4 Women.

Today she is active on the boards of One West and Independence Bank of Louisville as well as others.   She received the Business First Excellence in Leadership Award, the Leadership Louisville “Spirit of Yes”  award, Alumna of the Year Award at Sacred Heart Academy, the Tower Award from Presentation Academy, the Catholic Education Foundation Distinguished Alumni Award and she gave a speech with her daughter Gretchen as part of the 100 Wise Women series presented by Leadership Louisville.

Her favorite roles in retirement are wife to John Hampton, Mother (and mother in law) to Gretchen and Paul, and Nana to her grandson James.

Marta M. Miranda-Straub has over 40 years of practice in clinical and organizational social work. Her career focus has been the creation of gender equity and the elimination of individual, institutional and societal violence. During her career she has held multiple roles, such as, executive leader, director, professor, social researcher, psychotherapist, community organizer, advocate, activist, coach, trainer, and public speaker. She applies an intersectional feminist lens to all she does.

Marta’s life has been dedicated to violence prevention using a public health and public safety model grounded in social and economic justice. Her clinical focus has been mental health and substance abuse with a focus on trauma and healing from intimate partner violence, sexual assault and childhood sexual abuse. She has worked extensible with both victims, families and batterers. Her research and training have focused on providing assistance to trauma workers and impaired professionals suffering from secondary PTSD.

Prior to being selected as the President/CEO of The Center for Women and Families in 2011, she served as chair of the Women and Gender Studies Program, Executive Director of Multicultural Student Affairs and Tenured Professor in the Anthropology, Sociology and Social Work Dept. at Eastern Kentucky University for 17 years. Marta is the immediate past President/CEO of The Center, during her tenure she led the organization thru a major facilities crisis, implemented violence prevention programs, secured up to 8 figure gifts and led multiple violence prevention community initiatives including Collective Impact community interventions.

Marta has received numerous awards including; The Kentucky Coalition Against Sexual Assault honored her for 40 years of advocacy for sexual assault survivors with the SAMMY Award in Frankfort, KY. She was also celebrated as a founding member of the Bluegrass Rape Crisis Center in Lexington. She received the Martha Layne Collins Women Leading Kentucky award. She was named a Daughter of Greatness by the Ali Center, she also received The Center for Nonprofit Leadership Excellence award and was named a Compassionate Laureate by Major Greg Fischer amongst many others.

Since December 2004, Darlene has served as founder/Executive Director for GreenHouse17.  GreenHouse17, serving 17 central Kentucky counties, is an advocacy agency committed to ending intimate partner abuse and its impact on families and the community.  In her 30-year career as an advocate for survivors of power based violence and their families she has been responsible for direct service, comprehensive program development, and community engagement for social change efforts.  Ms. Thomas provides leadership for multiple community collaborations and committees; provides expert testimony on legal cases; facilitates professional development training for local, state, national and international forums, and provides consultation for organizations who are seeking strategies to reimagine their services.  Under her leadership, GreenHouse17 programs and services have received statewide and national awards for Innovation including: Mary Byron Foundation Celebrating Solutions Award, the Kentucky Non Profit Network Innovative Award, the Center for Non Profit Excellency Pyramid Award for Social Innovation and was a Partnership for Freedom/Re-imagine Opportunity national finalist.  She currently serves as Past-President and Legislative Chair for the Kentucky Coalition against Domestic Violence Board of Directors.

Her personal blessing in life continues to be the great fortune of being surrounded by incredible people.  Her patiently supportive spouse John.  Her funny and loving son Kaleb who is always a voice for fairness and justice.  A collective of colleagues who provide her insight and energy, a sisterhood of mentors and friends who keep her grounded, humble and authentic.  And the thousands of courageous survivors who have graciously permitted her to be a part of their journey.  All of whom are models of triumph and inspiration.

Marita A. Willis was born, raised, and groomed in the Bluegrass State of Kentucky, where she studied at the University of Louisville. Professionally, Marita began her banking career as a teller at the Bank of Louisville. She quickly moved through the field of banking and acquired numerous experiences in lending, developing expertise to catapult her into the government and corporate financial service industry.

Marita joined PNC Bank in August 2002 as Vice President of Community Development. As a Community Consultant, her primary responsibility was to aid in transforming low to moderate-income neighborhoods through education and financial resources. After leaving the banking industry, Marita worked at Community Ventures Corporation, a non-profit, as President of eHome America; a suite of online financial education products that offer affordable financial education to thousands of customers across the globe.

Marita worked as a Philanthropy Officer at the American Red Cross for three years. She is currently the Chief Empowerment Office/Executive Director at Hope Collaborative Inc., a non-profit serving our distressed community through various programs. She is distinguished personally and professionally as a result of her relentless efforts, giving of her time and energy, while working to empower youth and improve community relations and services.

Marita worships at Bates Memorial Church where she serves on their Community Development board. She enjoys spending time with family, friends, and her numerous mentees! In her spare time she enjoys interior decorating, reading and shopping.

Marita is married to Robert E. Willis. Together, they have two children – a daughter, Ra’Tonya, and a son, RaShaan, both who are deceased. They also have two grand guys – Noa’Sosa & Nehemiah Friedman who attends Colligate and a great Son (in love) Gary Friedman.

Help us celebrate the 2020 Women of Distinction at the 33rd Annual Celebration of Service and Survival on February 21, 2020.  For more information and tickets see our event page.