Patti was a “good girl” born in the Leave it To Beaver and Father Knows Best era of perfect families where bad things didn’t happen and good girls never got angry or had any need to cry. Patti, who was a very good girl, remained silent and kept the secret about her years of childhood sexual abuse. When she was date raped as a teenager, Patti did what she had always done – cleaned herself up, buried the memory, repressed her rage and tears of shame, put on a smile and went on about her “perfect” life in upper middle class, east end Louisville. She completed undergraduate, graduate, and post graduate degrees, married, joined a country club, had three children, and a successful professional life as a teacher and later as an elementary school principal. All these trappings of success brought worth to Patti’s shattered and damaged self image and the little voice in her head that whispered, “You are worthless. No one would ever believe you if you told. No one could ever love you if they knew the truth.”

After a personal situation resulted in family meetings with a therapist, Patti began individual therapy. Her private therapist suggested that she seek group therapy services provided by the Center for Women and Families. Patti began what would be a significant phase of her healing journey in The Center’s Adult Women Survivors of Childhood Sexual Abuse group. In that group, for the first time in her life, Patti didn’t feel so alone and so different. In the four years that followed, the group and The Center therapists accompanied Patti through the arduous process of uncovering layers and layers of pain, rage, and shame. They helped her dismantle the lies that accompany sexual abuse and assault that she had believed her whole life.

Patti Cazee Barron, who was terrified that someone would find out her secret, now stands before public audiences sharing that she was repeatedly sexually abused in her early childhood and that she is a date rape survivor. Through her journey, Patti has found her voice that was silenced so many years ago; now she is empowered and free of unwarranted shame and guilt and openly shares her story with others. 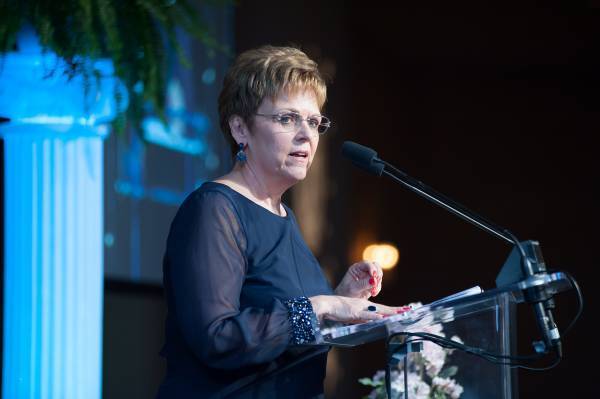 Patti stated “Group therapy provided several crucial experiences that could not have happened through any other avenue. Art therapy built community among us in a safe and even sacred place where we could express all the rage, grief, and pain revealed in the art we created.” Patti, who has been inspired to give back to the community, gives voice to those who have yet to find their own. She works to increase awareness of sexual abuse and assault through her participation in the Survivor’s Network at The Center.