I’ve never liked parades. Just the mention of a parade can be enough to kick off my whining: they’re too long…too crowded…too loud…too much…too boring…too hot (or too cold)…too much walking. As a rule, I avoid everything parade related. My friends and family can’t even remember the last time they got me to attend or participate in a parade, so imagine their surprise when I marched in the Pride Parade with The Center for Women and Families!

Even though I dislike parades, I knew this wasn’t about me. This was about The Center letting the LGBTQ+ community know that they matter and that The Center is here for them if they need us. As an LGBTQ+ ally and an employee of The Center, I wanted to be a part of spreading that message. It was also an opportunity to honor my transgender friend, celebrate my gay high-school BFF, show my queer friends I care, and say “I love you” one last time to my aunt who never came out of the closet.

So this parade-hating ally of the LGBTQ+ community marched with a group of over 30 Center staff, volunteers, friends and family down Main Street in Louisville for the 16th Kentuckiana Pride Parade to share a message of love. What I received in return was an even bigger message of love coming from the LGBTQ+ community to The Center for Women and Families. All along the parade route, the crowds on both sides of the street applauded as they saw The Center’s banner. As we passed by, waving and tossing goodies to the crowd, people cheered for us and shouted various messages of thanks to The Center.

The love coming from the crowd was emotionally overwhelming. I know I wasn’t the only one in our group with watery eyes as people shouted their personal messages of gratitude to us. My heart exploded with pride and suddenly it wasn’t too long, too crowded, too much, too boring, too hot, or too much walking. It was a celebration of mutual love and adoration. And I can’t wait to do it again for next year’s parade!

Written by Marsha Duffield, Admin Coordinator of Operations at The Center for Women and Families 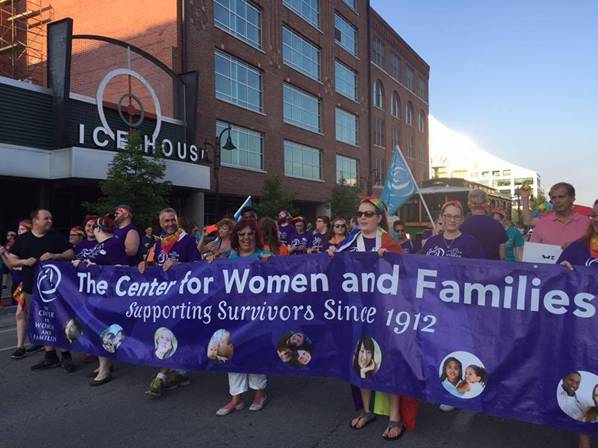